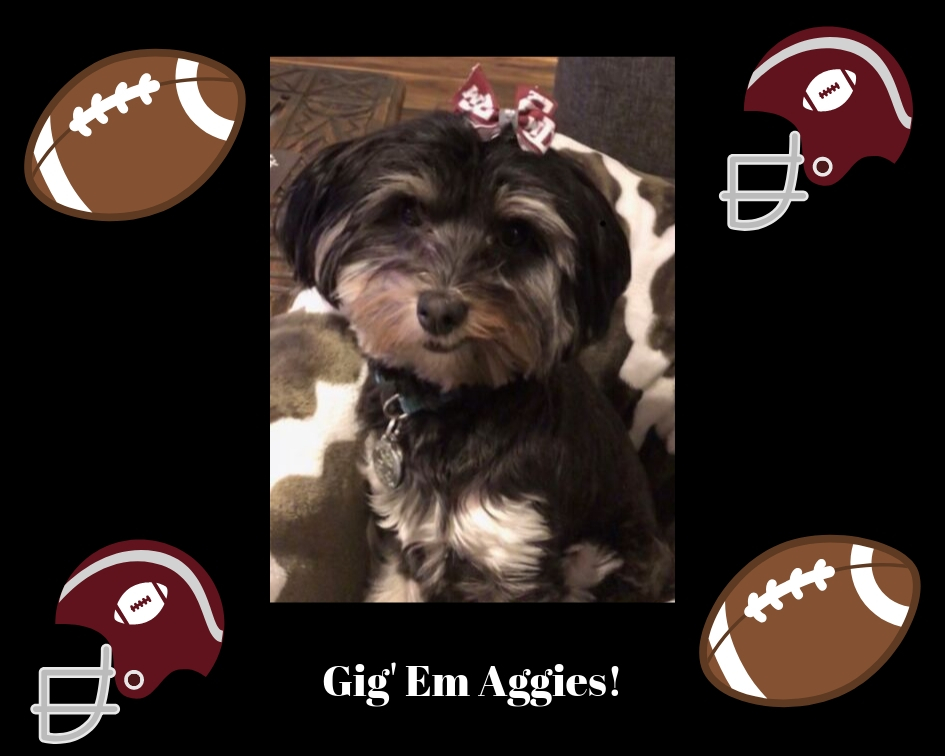 This edition of Amsterdam Adventures contains a lot of random thoughts and observations that I have made since living here…  I also HOPE that this edition encourages those that are new to a place to read my post and follow my guidance.

Size of the Netherlands

I found the information below to be very interesting comparing the size of the Netherlands to the size of Texas. 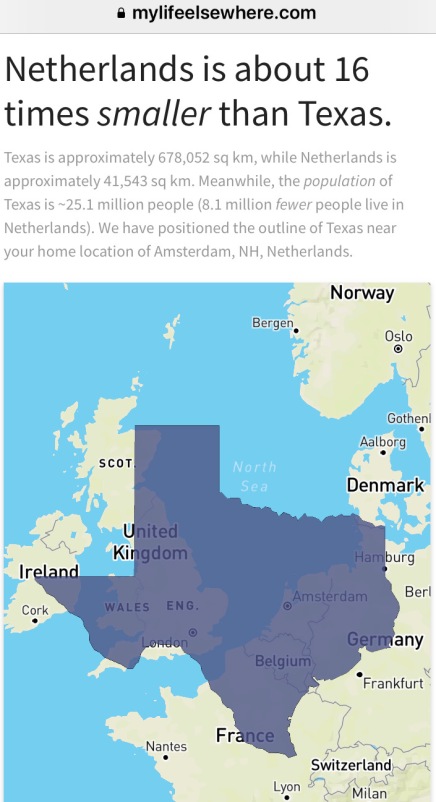 Do you have a Truck…with a Ladder?

If you move into an apartment that is not on the ground level and does not have a lift (elevator), moving requires a truck with a ladder!  The items are moved through the apartment window.  It is hard to see, but in the picture on the right there is a small hook that I circled.  A hook and rope are still used to move smaller items.  Tom and I are fortunate to live in an apartment that was already furnished and has a lift. 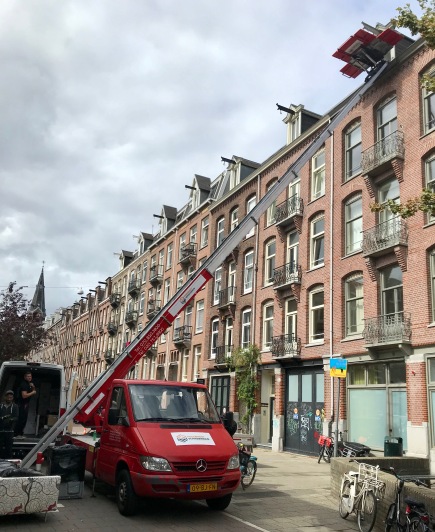 Becoming “Somewhat” of a Social Butterfly 🦋

I encourage anyone that moves to a new city, let alone a new country, to get involved and try to meet new people.  I believe that meeting new people has made the transition a lot easier for me living as an expat.  I am not very outgoing and keep to myself, but I have had to make changes in order to meet people.

At times, I find myself feeling homesick and overwhelmed living in Amsterdam.  The feelings usually pass and I continue on…  Tom is “my rock” and the dogs keep me company throughout the day.  Also, writing gives me the opportunity to express myself and reach out to family and friends that I love dearly.  It also creates conversation with them.  Often times, after I post on my blog, loved ones will reach out to me to see how I am doing.  My mom and I talk on the phone pretty often too.

I also visit with women from The American Women’s Club of Amsterdam (AWCA) at least once a week, or more.  As I look at my calendar this week, I have three activities planned with them.  I recommend signing up for AWCA if you would like to meet other wonderful women that are expats.

Tom and I are members of InterNations – Amsterdam.  InterNations is the world’s largest global expat network with 3.7 million members.  The main goal of InterNations is to create a positive and welcoming experience for ALL expats.  Tom and I attended InterNations Friday Drinks & Tunes at a Van Der Valk Hotel Amsterdam – Amstel.  We were greeted with a welcome drink and met many, many people.  Every attendee wore a name tag with with their name and a picture of their home country flag.  The name tags were very helpful because you were able to identify which members were from the United States and which members were not.  Tom and I talked with members regardless of where they were from and it was interesting to meet people from all over the world.  We also met people from the Netherlands too.  In the beginning of the evening, Tom and I talked to the same people, but by the end of the evening, we were talking to different people.  I met a nice girl from France and we exchanged phone numbers, but we haven’t had a chance to get together…  I recommend that if you are an expat to definitely sign up for the trial membership for InterNations and attend an event.

I also attended a Meet-Up Brunch with girls that live in Amsterdam at Beter & Leuk.  I was really excited to meet two girls that were actually Dutch.  I had many questions to ask them…  One of the girls that was Dutch said that she learned how to ride her bike when she was three years old and that the average bike lasts for about eight years.  We also talked about the heatwaves in Amsterdam.  She said the heatwaves were due to climate change and it never used to be this hot.  Also, she said that her friends were moving into newer places with air conditioning.  Brunch was enjoyable, but I will not be able to attend the next Meet-Up Brunch because I will be out of town.

I would say that I am putting myself out there and am not only meeting new people, but forming new friendships.  🙂

When you are in a new place, pay close attention to your environment.

School AND American Football Season is Back in Session!

The students are back in school!  An international school is across the street from our apartment.  The playground is in the middle of the courtyard, so all day long I hear screaming and laughter while the students are at recess.  The sounds echo off of the buildings.  My windows are closed AND it is drizzling outside AND I can still hear them playing outside!  The sounds bring a smile to my face and makes me feel like I am working at a school again.  I am also the “nosy neighbor” that watches over the school from my window – ha, ha.

Tom and I have been enjoying watching American football.  One weekend we watched Texas A&M and the next weekend we watched Penn State.  Our time zone is Central European, which means we are seven hours ahead of the United States Central time zone.  Both of our games were on at a reasonable time.  Moxie was glad too – ha, ha!

Of course, The Texans and Steelers played at the same time, but at a reasonable hour.

The Littles are doing great thanks to the pendants below.  When Macy was sick, her pendant was missing, so my mother-in-law sent me another one.  Macy also is not “overweight” anymore.

They also have their Pet Passports and are ready for Oktoberfest in Munich, Germany.  They are not attending the festival, but will be flying on the plane with Tom and I.

A friend in AWCA recommended that we shop at Noordermarkt for German attire.  Tom found brand-new leather lederhosen with straps very quickly.  I looked at a few dirndls and as I was holding one of them up looking at it, I hear the phrase, “In your dreams!”.  The words were coming from the lady that worked at the booth that was trying to sell the dress…  The Dutch can be “VERY DIRECT”.  I just looked at her and she replied that dress would not fit her either.  She continued to tell me how her mother used to be a size 0 and now wears a triple X.  I did not know of other places that sold dirndls, so I  continued to shop… I found a dirndl that fits – ha, ha!  I also found a white lacy top from the 1920’s to wear underneath the dirndl.  I would say that Tom and I are happy with our purchases regardless of the statement made.

After we finished shopping, we ate at Cafe P96.  We enjoyed a Tosti, which is a grilled cheese sandwich, on the cafe’s Recreation Boat on the water. 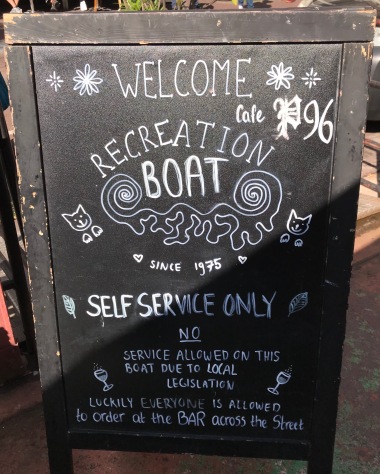 I think that I have covered enough, as of now.  I can always write more, but I will save that for another time.

Anchored in Hope in Amsterdam,